What if street artists were contemporary musicians?

Justin Bieber has a new hobby, and it’s got nothing to do with the brothels that he apparently frequents. Nah, it seems like many bored adolescent males before him (I’m looking at you Breezy) – Biebs has developed a taste for graffiti. He of the gas mask and drop crotch pants even busted out a wall while in Brazil recently, although perhaps yung Bieber should be sticking to his blackbook or iPad or whatever the fuck mind-numbingly rich people use to sketch on (the skin of the poor?)

Anyway, I sat down to write a serious think piece about the implications of blessed-Bieber co-opting one of the few (relatively) pure subcultures left in the world, and then actually managing to fuck up the execution so spectacularly. I mean, the dude literally wrote ‘street art’ on a wall – I can pretty much rest my case right here. But really, what’s the point? This is so sublimely ridiculous that there’s actually nothing I can write that will adequately express how truly awful it is. The French have an expression;  J’ai la haine, – which doesn’t carry an English equivalent. Basically, it expresses a base form of hatred that’s carried internally, but not specifically linked to an emotional expression at a person. It’s the swirling mess of apathy, anger, and resentment that becomes an overwhelming physical state – and it’s exactly what I feel like every time I look at the images above.

Still, graffiti and music have always gone hand in hand. Whether you look at hip-hop’s packaging of elements, or Crass’ early stencils – there’s an undeniable link between the two cultural forces. I mean, remember when Futura 2000 spit a verse on a track by English punk legends The Clash? So in an effort to put together something that was a little more interesting than me bashing out a thousand words of aimless hate – I thought I’d flip the script and partner graffiti writers/street artists with their contemporary musical counterparts. Lets do this thing. Banksy is the street art’s reigning king. He’s the stadium rock of the artistic landscape – bland, inoffensive, and undeniably popular. He’s an activist, but only in a flippant soundbite form. Sure, a Banksy stencil might make you think – but only for the 7 seconds it takes you to get the visual punch line while you’re walking to Starbucks, and then your mind is back on how to get the cute barista to notice you. Bono tells us that more humanitarian aid for Africa is a good thing; Banksy tells us that rampant capitalism is a bad thing. Both of these things are blindingly obvious, and shouldn’t require much of an explanation. The ideology behind the two is reductive at best, and ignorant at worst. While the origins of graffiti culture are comparable to Sex Pistols’ Steve Jones calling a beloved broadcaster a ‘dirty old man’ on national television, Banksy is more akin to recording a duet with Alicia Keys. Your mum loves Banksy. 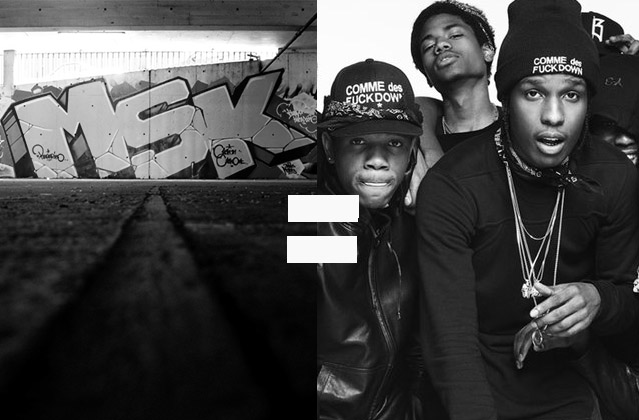 Both have taken elements of their subcultural history and redefined them. Both are products of the internet age. Both are current contenders for contemporary style icons, for better or worse. Their scope of influence transcends the medium that they’re working in, and permeates the worlds of fashion, design, and fine art. It’s Rocky collaborating with Raf Simons, and it’s Takashi Murakami allegedly shipping a billboard hit by Revok and Augor back to Japan to hang in his studio. They are media and marketing savvy, but are completely aware of their predecessors – and pay respects where they’re due. Their collective influence on the younger generation is inescapable. It’s visible in suburban teens trying to dress like goth ninjas, and it’s visible in suburban teens trying to rock fatcap flares like Pose. The vast majority of the imitators miss the point. Is there anything more depressing than a middle-aged punk? Sure – social equality, anarchy, and the tenacity of the DIY spirit are admirable values in your late-teens to early-twenties. But it’s hard to keep sleeping rough in a squat when you’re pushing 40 and developing  back problems. Also, it’s pretty hard not to compromise your values when your anti-authority posturing is adopted by the mainstream and packaged as a consumer product. You start off trying to embody a spirit of rebellion, and you end up a product of the culture that you wanted to dismantle. It’s recording ‘American Idiot’, or it’s launching a massively successful branded clothing company off the basis of an originally satirical advertising campaign. You know who will buy the next Greenday album? 14 year old kids who hang out in shopping malls. You know what they’ll be wearing? Obey snapbacks. Also, both have had cameos as themselves on The Simpsons, which is something I guess? 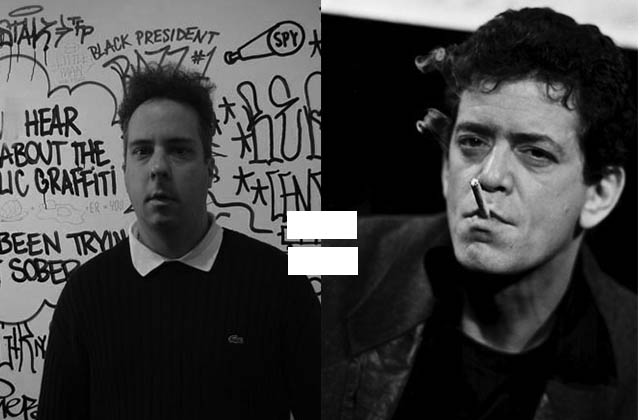 Inscrutable, intimidating, and effortlessly articulate – ESPO is graffiti’s Lou Reed. Not content to simply be a part of the culture, he makes an effort to reshape and reframe it. With a critical eye that’s positioned on his own practice, and the role that it plays in the cultural landscape – ESPO is almost universally respected. Reed’s musical career was long and varied, and (with the exception of one or two missteps) was deeply in touch with the cultural zeitgeist. Both artists understand the power of self-evaluation, and critical examination. This is why ESPO literally wrote the book on contemporary graffiti. Ps – ‘You suck until further notice’ are words to live by, irrespective of your field. 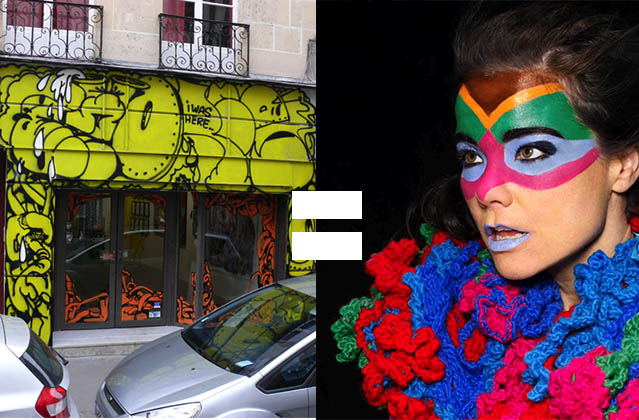 The Icelandic elven princess gets a whole stack of praise for generally not giving a fuck, and doing whatever she wants. Stylistically, both break all the rules, pulling apart the playbook and running it through a paper shredder. Overtly sexual robo-fantasy scenes that dive head first into the uncanny valley like Thelma and Louise? Sure thing. Monotone pieces painted with bucket paint fills, that show no regard for the stylistic conventions that were established by the preceding 30 years of graffiti writers? No problem at all. There’s a weird fetishisation of anything that’s born of something that isn’t a dominant (read; American) culture – and while both Bjork and Horfe have serious talent in and of their own right, they’re also blessed by their ability to be read as antagonistic to the prevailing cultural milieu. FACT, you will pretend to either ‘get’ Bjork or Horfe (depending on your social scene) in order to get into the pants of a young art girl at some time in your twenties. Plus, I kind of want to see the wily frenchman in that swan dress – but that probably says more about me than either of them.