Guy doesn’t get eaten alive by an Anaconda, Twitter is outraged

Yesterday, the highly anticipated Discovery Channel special “Eaten Alive” premiered, in which Paul Rosolie was supposed to be eaten alive by a giant anaconda in the name of science. I’ll admit, when I watched the trailer, I was pretty fucking excited to see a dude be consumed in the way that seagulls kind of deep-throat your rejected fish and chips. But alas… I, along with every other human with a Twitter account, found ourselves disappointed with Rosolie’s not-so-valiant effort. 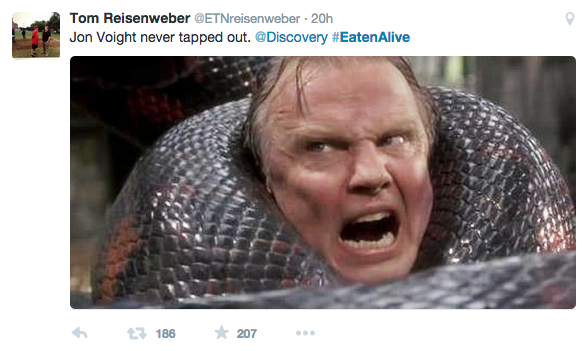 For the feat to take place, Rosolie had to protect himself with an obnoxiously bulky suit which also provided him with 3 hours worth of oxygen. The snake started wrapping itself around Rosolie, when he remembered that anacondas are not sleeping bags. You can’t just hop inside an anaconda for shits and gigs. It doesn’t work like that. It will crush you first. So he called for his saviours to come and rescue him from the aggressive…hug. Meaning NOBODY was eaten alive (sad face), despite the title of the show.

So of course, the world was outraged. The Discovery Channel lied to us after all. Or misled us, at least. It’s the same feeling you get when you see the picture of the Guac TenderCrisp burger at Hungry Jacks. Pure infatuation. But when you eat it, it tastes like a Mexican guy threw up in your chicken burger. But at least you actually ate it. Better luck next time, Discovery Channel.