Someone get the phone away from Gucci!

Gucci Mane probably never had all his marbles. He looks like he does hard drugs, he’s attended more court proceedings than award shows, and his most recent parole violation involved ejecting a woman from a moving SUV when she refused to have sex with him.

Gucci’s latest stunt is just as entertaining as it is sad and hopeless. It takes Twitter beef to the next level by involving multiple people at once. But, before we go into that, there are a few new Gucci developments that you should know about: First of all, he’s been dropped by Atlantic Records for reasons not completely known, so he currently has no distribution deal or income. He and his manager Coach K are no longer working together. And Gucci’s imprint 1017 Brick Squad is kaput. All of these things have been confirmed by his latest Twitter rant where he calls out all the members of Brick Squad, industry people, and rappers. Then, he proceeds to say he slept with a bunch of relevant female artists, irrelevant video girls and former American Idols.

It all started with Gucci calling out former Brick Squad members like Waka Flocka Flame, who’s now looking for a new deal since Atlantic and Brick Squad are no longer a thing.

Waka tell atlantic records dont call my cell bout buying. You from me unless they got 1million. If u rich waka. Buy yo contract bitch 1M

Jealousy is a dangerous feeling

Then he came for everybody in the world, namely Nicki Minaj.

Me and waka fuck nikki minaj dats nothing

Tell. Her intervention my dick in her throat I moved dat bitch to atl. Bitch u was sleepin n d car. Bitch. I pulled dat bitch off wayne bus

T.I. is not impressed.

Only a fool acts reckless for publicity.

Nicki Minaj fires back, even Twitter-rapping at one point and revealing that she and Tyga just turned down feature spots on Gucci’s next album last week with photographic evidence. (Note: Many of these tweets have since been deleted.)

May God strike me dead if I ever had sex wit that man. Lmfaoooooooooo. Nigga da way ya #ugliness is set up #BubbaGump #crackhead

I’m rlly cracking up. He’s fighting so hard for one more ounce of relevance. Tyga and I turned down his feature request last Thursday. 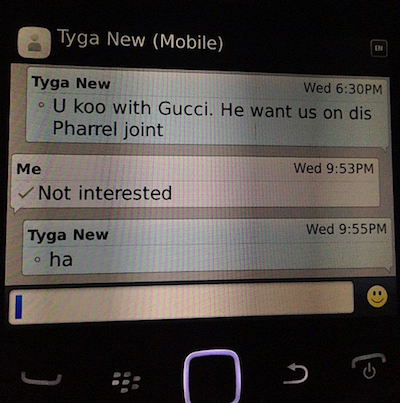 Ok Gee called me. *goes back to playing nice* that was fun tho I’m praying 4 him. 4real. He’s sick and in dire need of rehab. #Love

Then Gucci said he and two other rappers ran a train on the mother of Tyga’s cub, Blac Chyna.

Tyga tweets text messages from Gucci that Tyga never responded to. Then proceeded to shit on Gucci’s career via Instagram, demoting him to Burberry from Gucci. 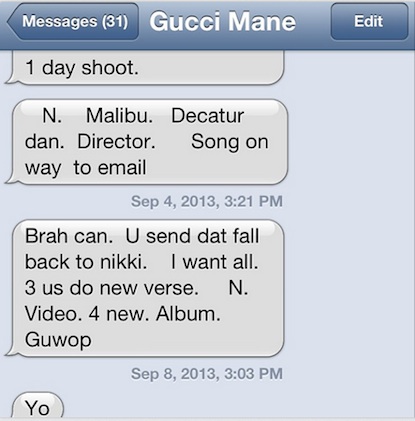 First off Let’s address the elephant in the room . Every 1 knows Burberry has HIV dats why nobody fuk with him.

But Gucci is still on a roll (or lots of drugs). He wants the world to know he’s been getting it in with all the industry ladies for years; they all throw up in their mouths a little bit.

I don’t think I’d ever order dirt broke dick off the menu… Im allergic. miss me with the antics. Thanks.

Rapper Rocko, who used to be married to R&B singer Monica, wasn’t too happy about Gucci tweeting about his ex-wife and took his beef to real life, showing up at Gucci’s home to fight or stab him.

Just seen. Rocko. Ge ask me. 1 question. All most was. With his maker. Who next. He cried like a hoe. N ran.

And what’s a rap/Twitter beef that doesn’t involve Drake?

Drske a groupie on instagram. Doin vines like he gucci. U will never be wop u a bitch

You know who’s most happy about this? Miley Cyrus. 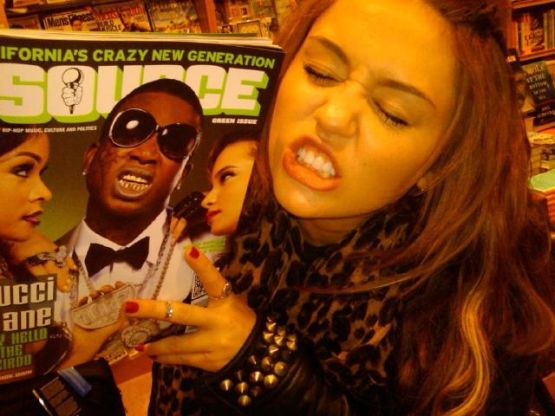 The worst part of it all is Gucci’s grammar, which he should be embarrassed about. Reading through these tweets, you may wonder if Gucci is tweeting really quickly with T9 keyboard configuration or if he’s seriously just that illiterate. Sadly, I can confirm that Gucci Mane is a high school graduate who received a college scholarship but was kicked out when found with nine bags of crack cocaine. Oh yeah, this is Gucci’s life.

Read all of Gucci’s rantings here.