Brodinski has been up in the French electro scene for a minute or more. Under his Bromance label, he’s worked, collaborated with and been influenced by a huge spectrum of artists both in his home country and in the trap heartland of Atlanta. His first album, Brava, dropped earlier this month and we had the opportunity to discuss his phenomenal artistic growth that has led to this point. He was more than happy to oblige.

Congrats about Brava. You’ve been putting out stuff for a while – you were getting singles pressed on vinyl back in 2007, but this is your first full length album. It seems like you took a lot of care in developing your sound before approaching a full length release. Was that an intentional thing?

It wasn’t really intentional. I never wanted to do an album before and about two years ago, I remember telling myself “I think now I know I want to do one”, you know? I think I had a vision for it. Because of that, I’m glad I had the chance to experience different sounds and take my time and work on it. And now I’m definitely happy with how it’s worked.

On the album, you’ve come in to your own sound but your remixes on Soundcloud include artists with sounds very unlike yours. Empire of the Sun and Sebastien Tellier for instance. Does that reflect a passion you have for music outside your immediate genres?

Yeah, I think I try to open the circle and the spectrum. I like to be an open minded DJ. I learnt from the best like 2ManyDJs and of course all of my teachers were great examples of open minded people. I think I definitely want to follow this path.

It seems like you work with a lot of specifically ATL based rappers. What’s the allure for you with that particular rap sound?

Yeah! I feel like it’s been a romance for three or four years. I’m really interested about what was going on in ATL and from Gucci Mane, of course, originally a long, long time ago. He’s the legend there- the Trap God as they call him. After some time, he became one of my favourite rappers and I loved everybody around him like the smaller rappers on the tracks. I love the scene and what was going on in ATL. I love their sound and I think about what we want to do with the sound and I’m trying to invent. I just want to go there and experiment with them.
I think all of them made me a big fan of their music and a big fan of them because I met them personally and I got to spend time and make music with them and I’m definitely really grateful for that.

“I wanted the crew spirit to be present on this album.”

You’re talking about music as invention and inventing things yourself. Briefly, what is your creative process like?

My creative process is involving a lot of people. Especially Brava. I created a team of three people including me but also Mida, She is one of my close collaborators from a while ago and a really good friend. We worked together for a long time and when I decided to work on the album I wanted hier to be on it. I also contacted DJ Kore. Kore is a big producer in France for R&B and hip-hop and he has a lot of experience. I needed someone around me to be objective and give me good advice and he is one of the best producers I have ever worked with. I created a team because I did not want to live that alone and travel alone and I think as always I tried to create a bromance, with the whole crew going together on tour. I wanted the crew spirit to be present on this album.

Also the look of the album and the accompanying website with the vertical scrolling incorporates some of the current icons of current aesthetics like health goth and future pop and distorts it into something very new and kaleidoscopic. Were you heavily involved in the visual element of Brava?

The visual elements and creative direction was all done by Le Creative Sweatshop which is a collective of four people involved in the whole artistic project but also a typograph called Adulte Adulte who did the logo for Brodinski and the Brava typo (sic.) and the whole typo in the books and all the covers and the website too. I worked with the six of them on the whole visual conception and I think, as you say, a lot of it is taking codes from what we know about today but also codes I particularly like but most of them, we are putting them in a real life situation and I think the music was the same. While it’s different, it’s still music that you’re able to listen to anytime and anywhere.

The ‘Can’t Help myself’ video is great with the bubble that emerges out of the character like a giant grape and causes him to reverse in age. Is there something you express in the music’s visuals that’s different to what you want to evoke from the music itself?

Yeah, I think that the artistic direction for the album and the music videos are two different things for me. And I think of the videos as an artistic creation around the music, especially because it is motivated and carried by the music. It is good to see other people having a vision about what you do. When the first treatment of the ‘Can’t help Myself’ video came to me I was like “oh my god”, because they had a whole idea around it. The Megaforce guy, who worked on the first video, with a team of four people, I remember I took them into the studio to listen to the track and they were like “okay, let us get back to you” and it’s experiencing and sharing ideas with other creative people. It’s the most interesting thing in music.

That’s one thing, watching those videos, I guess it’s a common thought, but creating music often creates new artistic opportunities. Not just for the musician, but for others.
Yes, exactly, exactly, and you know I think your proper artistic concepts should carry not just your music but the whole message of what we want to do and I think image became really important. It’s easy to put a picture of you on the front cover. That’s what I did actually [Laughs] but I am thinking why not give your music to other people? I wanted to show that individuality.

“Any kind of music we try to do it is principally for the club. I feel like it is open-minded club music.”

How would you describe the Bromance scene and aesthetic to an Australian or someone who didn’t know French electro?

We are a French electronic label that is open to all kinds of music, but especially rap. It is always club orientated. Any kind of music we try to do it is principally for the club. I feel like it is open-minded club music.

What do you think about the way music distribution and the Internet age has created homogenised internet communities, genres and styles?

I think because of the whole changes of the music business and the Internet coming up, us as part of it can work with it. You and me are actually talking right now, we’re using this tool pretty well. Nowadays because of that we can talk to each other and we can meet anyone we want, we can know anything we want because we know to take care of it and we know how to use it. I feel like now everybody can make music and everybody can produce, everybody can listen to music and everybody can become a fan of music. That’s what I did. I just respect what is going on right now. I exist because of it and it’s changing every two years. Nowadays, I don’t even recognise myself anymore. I see myself on websites I used to check all the time, and I am like “now I need to change” and I need to stay on it and I think it’s the same for everyone.

Sometimes people lament the idea that its so hard to create new things, but it would have been so difficult for you to work with Atlanta rappers and casually talk to international press even a decade ago.

Of course, of course! The way we work today and the way we worked on this album is completely new and we had a chance to travel because of the tour and playing several festivals and clubs in the USA. We could travel to ATL and New York for the gig and I am so grateful for that. We are so lucky right now to make it differently. I can send an email to some friends I haven’t seen in a long time and they’re so happy that I’ve done it, been there, travelled and balanced it. That’s what matters the most. That’s what I’m trying to build in the music.

You just said you don’t recognise yourself from two years ago because the evolution of the scene is so fast. In 2012, you talked about how the French scene was extremely supportive about fostering a community of difference and you mentioned David Guetta supports the Bromance label even though the sounds are disparate. Is that the same today?

Yeah! I feel like it’s the same energy. We are still optimistic and seeing a good side of everything. I think it’s the same for me today than four years ago. So many French people are making music and everybody’s getting along, I can just send my album to Cassius for example. Like, everybody’s getting along and welcoming it with open arms. Great, open minds is the energy I like to see. Definitely.

At your Brava album launch party, you were described as the new face of the French electro scene. What’s it like hearing those sort of descriptions about your artistry?

In electronic music, you’re the new guy for 10 years. You’re a legend for 10 years and then nobody cares. [Laughs] I’m just kidding. I’m not actually kidding about the first part though. For the first years, it’s always going to be new. Also, I’m not young but I’m not that old so it’s easy to say my music is new. It makes me surprised though, you know?

It can be a good sign, the idea that you’ve developed something that, even though you’ve been around for a while, you’re still seen as doing something new. There’s a suggestion of relevancy behind that.

Of course. I think about what we do with the album and the label and I see it not as a climax of my career but a new start. It’s a new adventure, a new path. It’s what’s most interesting to me. I want to keep the same imagery for everything and we think it’s going to get better and better.

Has there been a high point so far? What’s the chapter two of your autobiography?

Actually, chapter two started last week when the album came out. I think because it’s been a few years, like seven or eight years of touring two or three times a week. I had a lot to say on the decks, but not much in the studio and I think with the album, I now know what I have to do in the studio and I know what I have to do behind the decks and that’s something new.

Brodinski is currently embarking on his Brava tour. He’ll be performing in Melbourne on May 8 and Sydney on May 9 thanks to BBE. Find out more here. 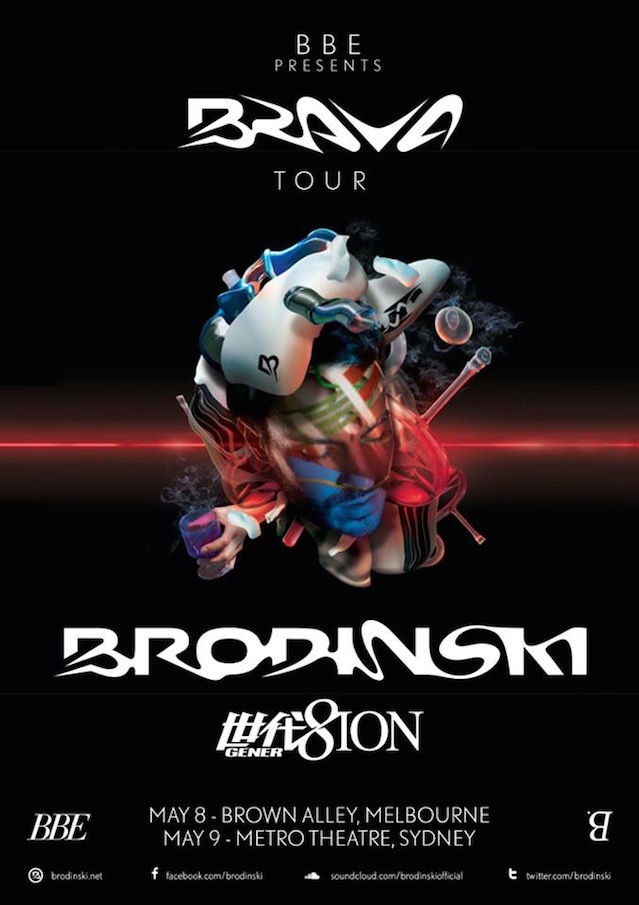