Sydney producer duo Pat and Cosmo Liney don’t just make music that adheres to a bouncy vapouranime aesthetic, they live and breathe it. As lovers of video games and vibrant, textured fashion, their ideals of consistency reflect their deep fraternal bond. We asked the boys identical questions ahead of their upcoming Australian tour

By night I… make tunes.

The last movie I watched was… 12 Years a Slave.

The first album I ever bought was… Aqua – Aquarium (Doctor Jones/Barbie Girl).

The last was… Perfume – JPN.

If I wasn’t making music I would probably be… focusing on expanding my extensive and illustrious modelling career.

My perfect gig would involve… lush, handcrafted AV set and touring with my Sydney Fam.

The first gig I went to was… what i consider first REAL gig was Hudmo/Rustie @ Manning Bar.

My hangover cure is… sippin’ on Gatorade/HJ’s.

People always ask me… are you twins? Can u read each other’s minds?

If I could only eat one thing for every meal, it would be… HJ’s Angry Angus.

My computer’s wallpaper is… blue.

My favourite piece of apparel I own is… A close tie between my luscious patterned leggings and oracle long sleeve with a race-car on the front.

My name is… Cosmo.

By day I… order food from Menulog.

The first album I ever bought was… So Fresh Spring/Summer/Winter/Autumn?2000andsomething.

The last was… Yung Gud – Beautiful/Wonderful.

If I wasn’t making music I would probably be… Homeless.

The best thing about touring is… Seeing new places and how people react differently.

The worst thing is… Lonely Hotel Life and lack of wi-fi.

My perfect gig would involve… Playing shows with our Sydney family and the crowd loves every tune.

The first gig I went to was… Hudmo/Rustie @ Manning Bar.

The most important thing on my rider is… orange juice

My hangover cure is… greasy food and basking in computer rays.

People always ask me… are you twins?

If I could only eat one thing for every meal, it would be… Mummy’s mac and cheese.

My favourite YouTube vid is… too many to tell – Blank Banshee’s Musical Saga is pretty good though.

My computer’s wallpaper is… Several poses of Zero Suit Samus.

My favourite piece of apparel I own is… Weird matching squiggly design shirt and leggings.

Cosmos Midnight are hitting the road soon and trekking across Australia from February 20 onwards. More info is available on their Facebook. 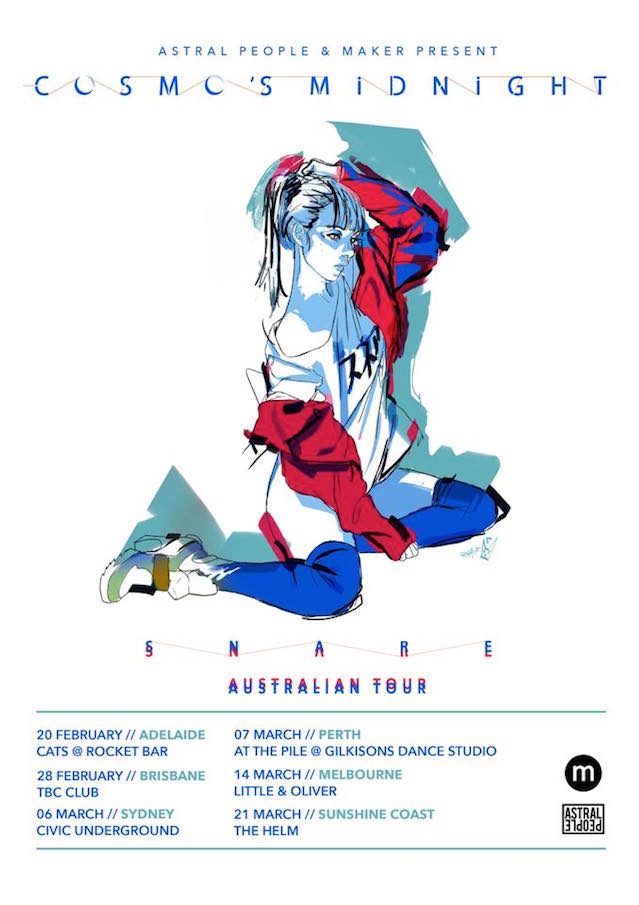