His critics dismiss him as totally nonsensical white trash, his fans see him as a blue-eyed genius of the white rapper world, and apparently Riff Raff sees himself as 2013’s ‘Rookie of the Year’. Diplo makes an appearance in the clip, as does Lil Debbie, but really it’s just all your usual Riff Raff, so don’t expect anything less. What’s really the highpoint of all this though is that Riff Raff himself (aka Jody Highroller) has taken to YouTube’s comments section to fight off the haters and make an attempt at explaining some of his lyrics, like so: 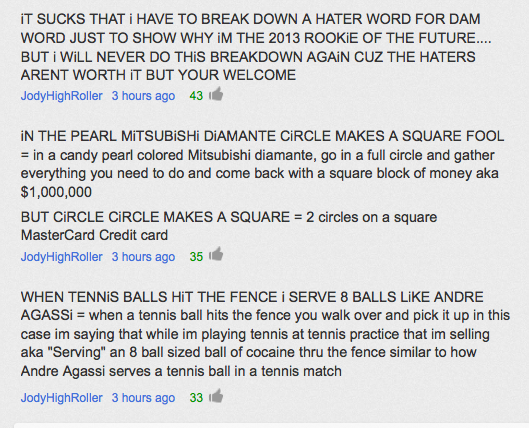 Amazing. There’s a bunch more after that so if truly understanding the deep inner meaning behind Riff Raff’s verses is something that interests you, go check it out.