kind of — will open it’s second solo show “Special Reserve” November 8th by Will Lynes. It’s going to be an amazing show we can’t wait.

Will’s work is reminiscent of an era and trade long past. Influenced by old original
hand painted signs, Will uses modern slang, gold gilding and ageing techniques to
re-create traditional signage of yester year. With references to fictional businesses and
colloquialisms inspired from days gone by, Will’s work will invoke a sense of history in
the gallery.
Lynes will use glass and found objects as his mediums and will create an installation
to be remembered. Will has been working with glass for the last 2 years, and painting
signage on boards and found objects for the last 4 years.

“ …. it was seeing all the old bars and shops with their original signage.
Places in the middle of nowhere, all run down and dilapidated… still having
half a gold leaf or neon sign on the window that looked like it had been there
for a hundred years. You get a weird sense that there was a story or history
behind it. They just had amazing character to them so I started trying to
replicate that feeling.
It’s cool to do a brand new gilt or hand painted sign on a window, but there’s
something nicer to me about a sign that looks like it can tell a story…
good or bad.”

*A limited edition Special Reserve tee-shirt by Will Lynes, kind of — and Design Tshirts
Store graniph will be released at the opening night. 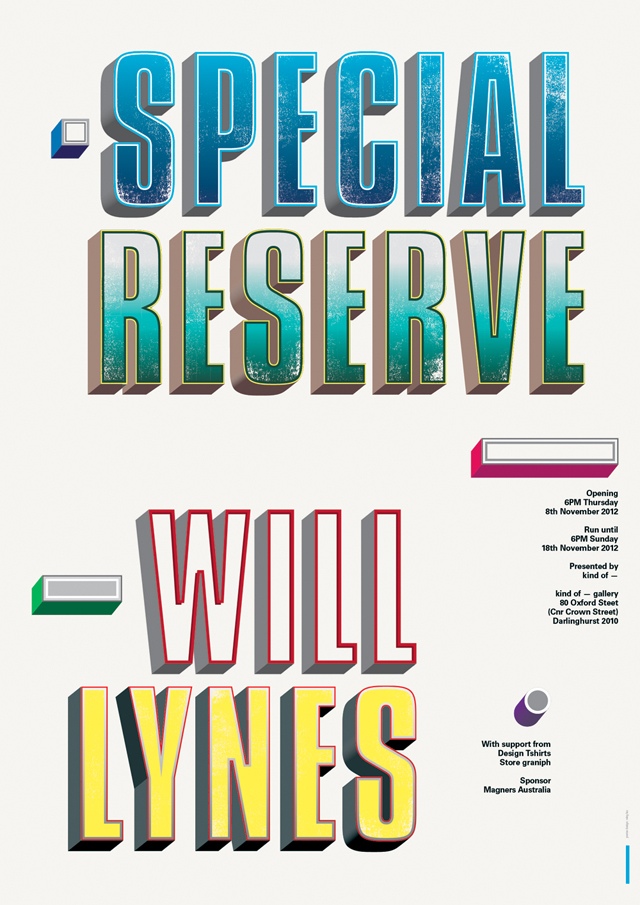