Catch J.I.D If You Can

It’s a 40-degree Friday evening in Melbourne, and the sold-out crowd of Max Watts is awaiting the arrival of J.I.D. There are nearly a thousand people here waiting to witness the lyrical prowess and machine gun-like flows the East Atlanta rapper is acclaimed for. His DJ and in-house producer Christo is hyping up the audience, screaming “Dreamville is in the house!” to a thunderous applause. And as J.I.D approaches the stage, the crowd begins to bellow, with the beat dropping for the fan favourite “Lauder”. The opening lyric rings relevant—“I told motherfuckers I was sick as a bitch”.

An hour and a bit later, I’m in J.I.D’s green room. It’s stuffed with people. Conversation is loud, the scent of weed is louder. J.I.D is celebrating the completion of his second sold-out show in Melbourne by swigging from a Hennessy bottle. And while smoke shrouds the small space, it’s clear he doesn’t really want to talk to me. He has a club appearance in an hour and a flight to Sydney the next day for Hidden Festival. His spare time is limited, and he’s just blasted through an hour set that really spoke for itself. “We in that after show vibe right now man,” he says politely, “we having fun, sitting back, celebrating.”

Still, our conversation moves forward—a testament to his continued grind. It’s something he alludes to on the Dicaprio 2 opener “Slick Talk”, a mix of nocturnal trap music and grimy boom bap produced by Kenny Beats and E Wonder. On it, he spits “I’m from East Atlanta like Gucci and Travis Porter, but my story is similar to the hare and the tortoise.” These bars document his slow rise to the forefront, from his start in Atlanta rap collective Spillage Village, to signing to J Cole’s Dreamville imprint. It also explains his kinship with Leonardo Dicaprio: “At the time of the first Dicaprio he had no awards and I wasn’t signed, making music that was falling on deaf ears,” he says. “But the symmetry on Dicaprio 2 is that he’s got his Oscar and I’ve got my deal–there’s a duality there.” 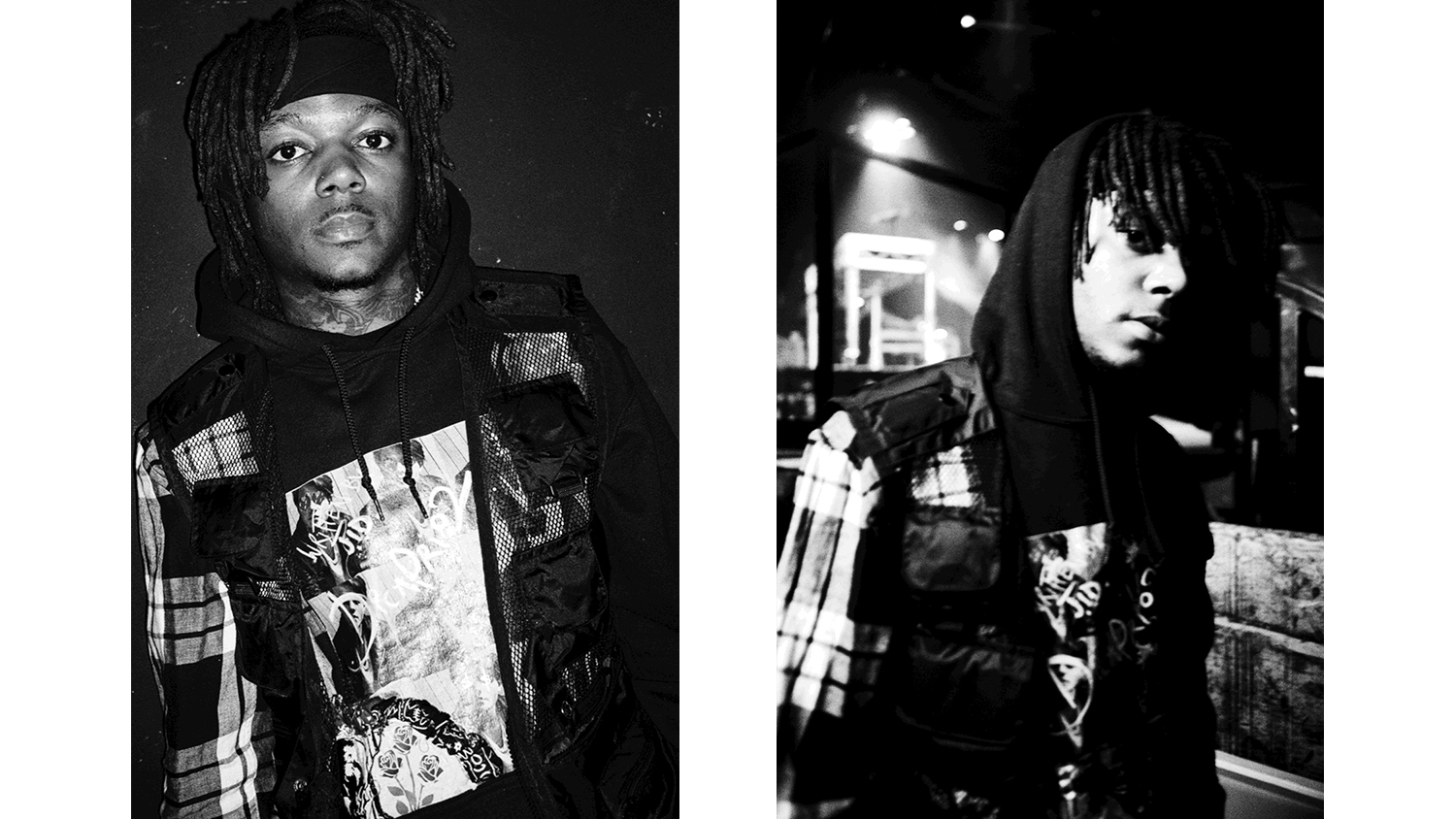 “At the time of the first Dicaprio he had no awards and I wasn’t signed, making music that was falling on deaf ears.  “But the symmetry on Dicaprio 2 is that he’s got his Oscar and I’ve got my deal–there’s a duality there.”

Hearing J.I.D’s music, it’s hard to believe he was ever overlooked. His 2017 debut album The Never Story was a dark, gritty memoir that garnered him comparisons to Kendrick Lamar. DiCaprio 2 is a style-bending melting pot that finds J.I.D on an instrumental killing spree—every tempo can get the smoke. But it’s not surprising; he’s from Atlanta, a city where you have cold-blooded bar-smiths like 21 Savage, oddballs like Young Thug, and hip-hop legends like Outkast. In the birthplace of trap and the home of some of hip-hop’s biggest superstars today, it can be hard to stand out. But J.I.D acknowledges that the lineage of ATLiens gives him access to some advanced rap technology. “There’s just something in the water out there man,” he says. “It’s a bunch of black people cut from different cloths.”

J.I.D is the protagonist in a screenplay of his own, but there’s always been a cast of supporting players to help direct his vision. In the past, it’s been his family, growing up as one of seven children. Then, it was writers like Taylor Sheridan, who penned the screenplay for Hell Or High Water, inspiring the rapper’s cinematic approach for telling stories of his own. Right now, he’s fascinated by Paul Coehlo, and is on page 20 of his psychedelic treasure hunt The Alchemist. And on Dicaprio 2, there were people like DJ Drama, who in J.I.D’s words, gave the project an “…entertaining, energetic feel.” You’ve also got The Crowns Of Glory, whose song “I’m So Grateful” acts as the soulful sample that fuels the passionate “Off Da Zoinkys”. The most notable of them all is the late Mac Miller’s presence on “Skrawberries”. He helped curate the J.Cole-produced cut, and made it the heartfelt, soulful anthem it is today. “He was just a really good friend and genius,” J.I.D puts aptly. “I didn’t even ask Mac to help out with the project, he just wanted to. He really had a knack for bringing shit together. He took the components of the song and brought them into a singular realm. He made it cohesive.” “I didn’t even ask Mac to help out with the project, he just wanted to. He really had a knack for bringing shit together. He took the components of the song and brought them into a singular realm. He made it cohesive.”

J.I.D is the indie movie that’s crossed over into blockbuster territory. He’s a member of J.Cole’s prestigious Dreamville imprint alongside acts like Bas and Earthgang. And while the collective is still trailing teams like QC and TDE, J.I.D is the catalyst for their deadly 2019 reboot. In late January, J.I.D called into The Joe Budden Podcast and explained that he was “with the smart shit, but with dumb shit as well”, and that he was still “ratchet”. This duality seems to be rubbing off on the label. You can hear it in J.Cole’s head-hunting guest verse on J.I.D’s ‘Off Deez’, and with the highly anticipated Revenge Of The Dreamers III, the forthcoming Dreamville compilation that features Tay Keith, Saba, and more. Judging by the determined bluster of J.Cole’s rebrand on songs like ‘Middle Child’, it’s clear that J.I.D’s give-no-fucks braggadocio is starting to rub off. “J.Cole is cool, he’s the homie, I respect his craft, he respects mine,” he says.”Cole challenges me to think more, and to approach new ideas in a fresh way. He gives me great advice, and I give him advice back.”

“Cole challenges me to think more, and to approach new ideas in a fresh way. He gives me great advice, and I give him advice back.”

Much like Leo, J.I.D is writing his legacy right now. Dicaprio is his This Boy’s Life, a breakout role that many feel didn’t get the attention it deserved. The Never Story is The Departed, the first glimpse of the lofty summits that his talents can take him to. And Dicaprio 2 is his The Wolf Of Wall Street, a grand, high-octane journey that shines every light on its main protagonist. So where’s his Revenant? “It’s coming,” he assures me. But as I watch him take another swig from his bottle of Hennessy and look towards a night of celebrating, it becomes obvious. The sold-out shows in Melbourne, the co-signs from Mac Miller and DJ Drama, the record deal with one of the biggest rappers world—J.I.D is already living his Oscar moment.

The New Locals: Raj Mahal The Sydney via Boston rapper talks about his latest string of singles, love for electronic music, and his favourite Gucci Mane song.