Britney Spears‘ last album Britney Jean was a flop, but not for lack of trying trying. The album was executively produced by will.i.am and had Diplo, Sia and Katy Perry pitching in too. Yet, no one cared. Things might have been a little different if she’d gone through these offerings from Dev Hynes (Blood Orange, Lightspeed Champion, Test Icicles).

The two demos songs, as sung by Hynes, would have made for a brooding album that might have captured imaginations more than that ‘tormented-but-upbeat’ vibe she was committing to mp3 with Britney Jean.

The tracks were leaked on Monday from an anonymous SoundCloud account which also has the demo to Sky Ferreira’s ‘Everything is Embarrassing’. Hynes sounds like he’d be perfect for the Spears album that was supposed to be her most emotional yet, so why were the tracks canned? He doesn’t know either. 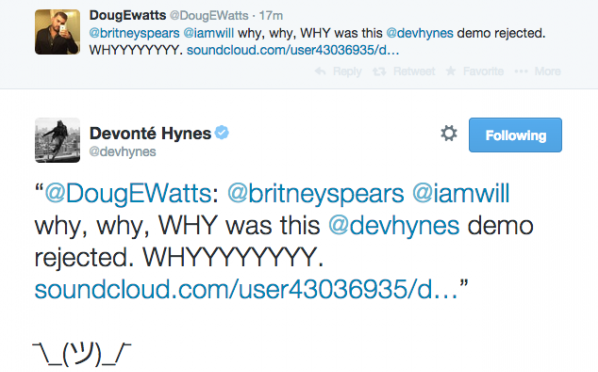 Give the discarded songs some love below.