H.E.R. reveals almost everything with an album prelude

The songstress talks growing up, getting personal, and her latest EP

Signed while she was still in school at the age of fourteen, musician and singer songwriter H.E.R. has always seen a career in music ahead of her. Her creations gave her a valuable outlet to be open about her thoughts and feelings, as she tried to make sense of who she was growing up.

Going only by the stage name H.E.R., an acronym for having everything revealed, it was her intention to be completely open and honest about her true self through her music. It’s a sentiment she believes her listeners can experience fully, without ever seeing her face or knowing anything about her private life.

Best known for her hit song ‘Focus’, from her first EP H.E.R. Volume 1, the track that “kind of started it all”, she has since gained an all-star following of supporters that includes Rihanna, Bryson Tiller, and Alicia Keys. Ahead of the release of her EP I Used To Know Her: The Prelude, we discussed her headline Lights On tour, what informs her decision to remain an anonymous performer, and who inspired her musical journey during her younger years. 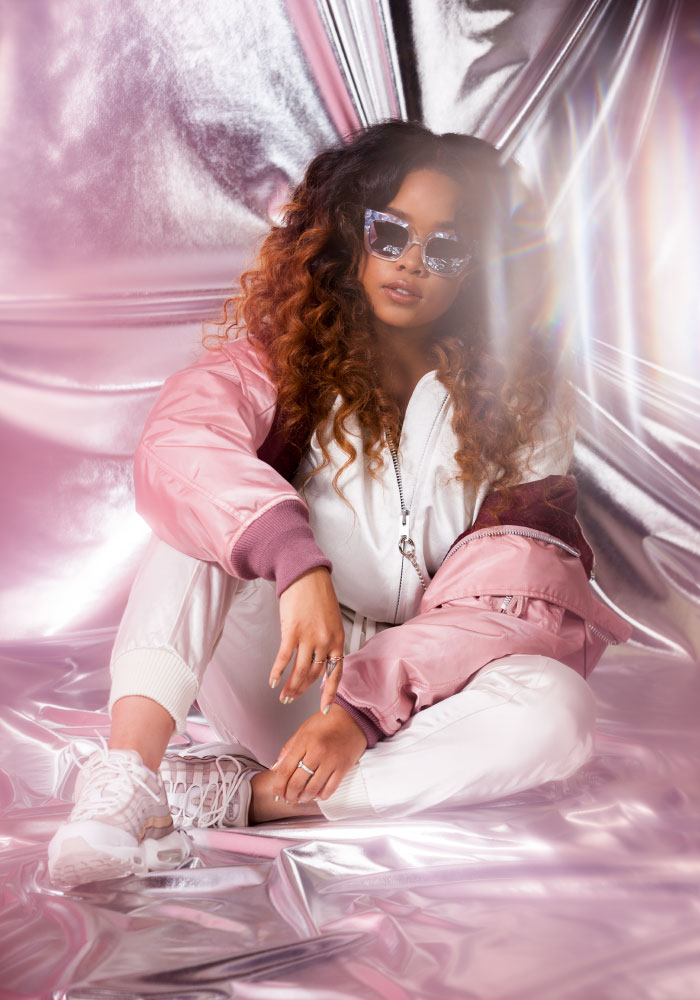 How did you find your first time in Australia?

I loved it! It’s really cool, Melbourne reminded me of where I’m from–San Francisco Bay Area. And Sydney kind of reminded me a bit of L.A!

I agree San Francisco is very much like Melbourne! Can you tell us how your tour went and what the title, Lights On, is about?

I wrote a song called ‘Lights On’ that’s in Volume 2 and this was my first official headlining tour. It started in North America and then we did Europe and then Australia. And I thought because it’s my first time headlining, I’m revealing a lot of the songs on stage and people are hearing the music it in a new setting. So that’s why I decided to call it Lights On.

When you perform on stage is it very instrumental, or more electronic?

Very instrumental. I have a bass guitar player, keys, a drummer, and two background singers. And then I play guitar and piano in all of my shows and I switch back and forth between the two. I’m definitely very musical and very involved in the production of my songs. I like to showcase that live and I’m very dynamic, musically.

Your lyrics are quite personal and intimate, are they inspired by things that happen in your life or are they about relationships and love in general?

A lot of the songs I like to call my diary. Pretty much every song is about something that I’ve been through or an exaggeration of what I went through or something I relate to.

Are there any in particular that are the most meaningful to you or that is your favourite to perform?

It’s hard to pick favourites (laughs) but ‘Losing’ is one of the songs that started it all and that means a lot to me; I wrote that on piano originally. ‘Focus’ is, I think, everybody’s favourite. Which is also very very personal, so those are probably the two that I love to perform.

Cool, I love them both too. When did you first start writing/making music?

I’ve been writing music for a really long time. I don’t remember exactly when I started but it’s been the majority of my life. I’m a poet as well as a songwriter and poetry has always been a passion of mine. I even wrote silly poems when I was five years old. I’ve always been a writer, so I want to say I wrote my first song when I was about eight. It started really early. 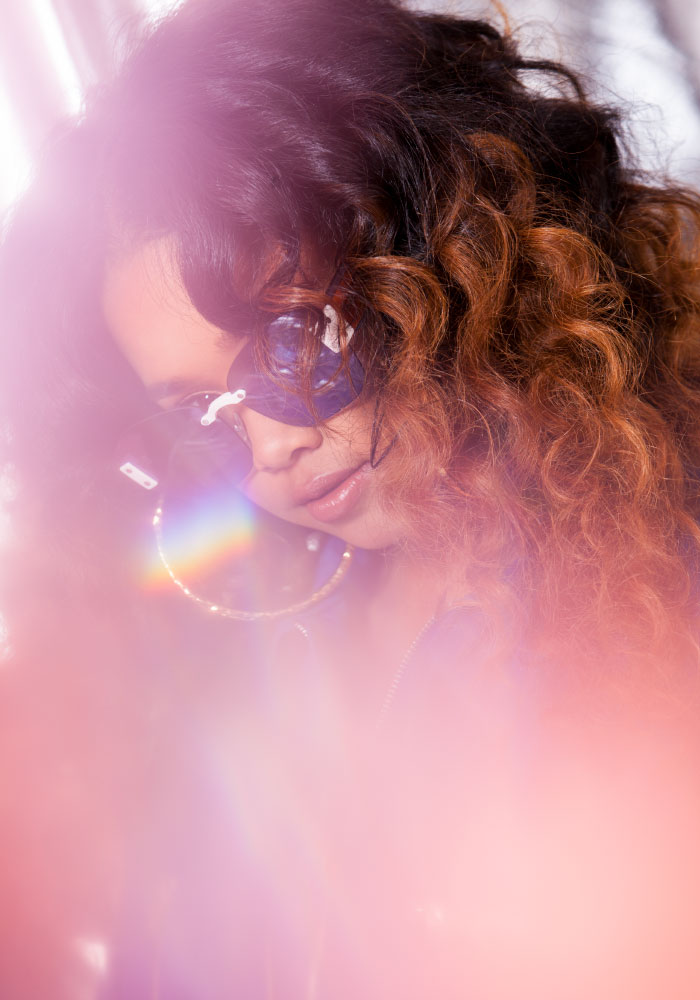 So when you were growing up making music and writing poetry, were you driven by any particular influencer or inspiration?

Yeah, it was what was inside of me. My thoughts and feelings often led me to internalise a lot and I feel like music became an outlet and allowed me to express myself and to be emotional in my writing and singing. But I’m definitely inspired by a lot of other artists. My father is a musician–he’s the reason I started making music–I learnt a lot from him and it was all around me because of him. Early on, the artists that he would play around the house like Prince and Michael Jackson and James Brown and people like that were the people that I grew up listening to. It comes naturally to me.

I read that you got signed at fourteen – how did it feel when that happened?

It was long ago–well, I guess not that long ago. It’s hard to remember, but I was very excited. I really didn’t know what it meant, I just knew that I was going to be able to take my music to the next level and really make a career out of it. I was still in school but I knew I would have a little bit more freedom to be creative, and that I would be able to set goals to do an album or whatever it would be. I was so young and honestly, music has always been something I could see ahead of me and I’ve always been passionate about it. It’s not work if you love it, so it didn’t really change the way I thought about that after I got signed. It amplified and elevated my love for music.

Were you always making similar stuff to what you are now, or did your current style evolve over the years?

I think it’s definitely evolved. The biggest difference obviously is that I’ve progressed, but also music itself has changed a lot. The sonics have changed, the production has changed, the design is definitely a lot different. That said, lyrically I’ve always been honest and straightforward. I love to tell stories and that has definitely stayed the same, it’s just elevated.

What was your reason for wanting to conceal your identity and have a stage name?

Well, I really just wanted the focus to be on the music and the decision came later on when I was trying to figure out where I was. Even when I was 15, 16, and 17 I was still trying to find out who I was because you’re not the same person at 14, as you are at 18. So those years I was just developing and learning how to record in the studio and to work with other people and figuring myself out. But [it was] when I started writing songs about those years between the ages of 16 and 18 when I was becoming a young woman and going through things like heartbreak. I found that it was a bit hard, to be honest in my music and feel comfortable, so I thought why not just have a stage name and a silhouette as a cover and no face attached–just the music. That way no one could make any assumptions or listen to it based on what they know about me; just listen to the words and accept them and the message and leave it that. I thought it was the best way for people to receive it and just hear what I was saying. 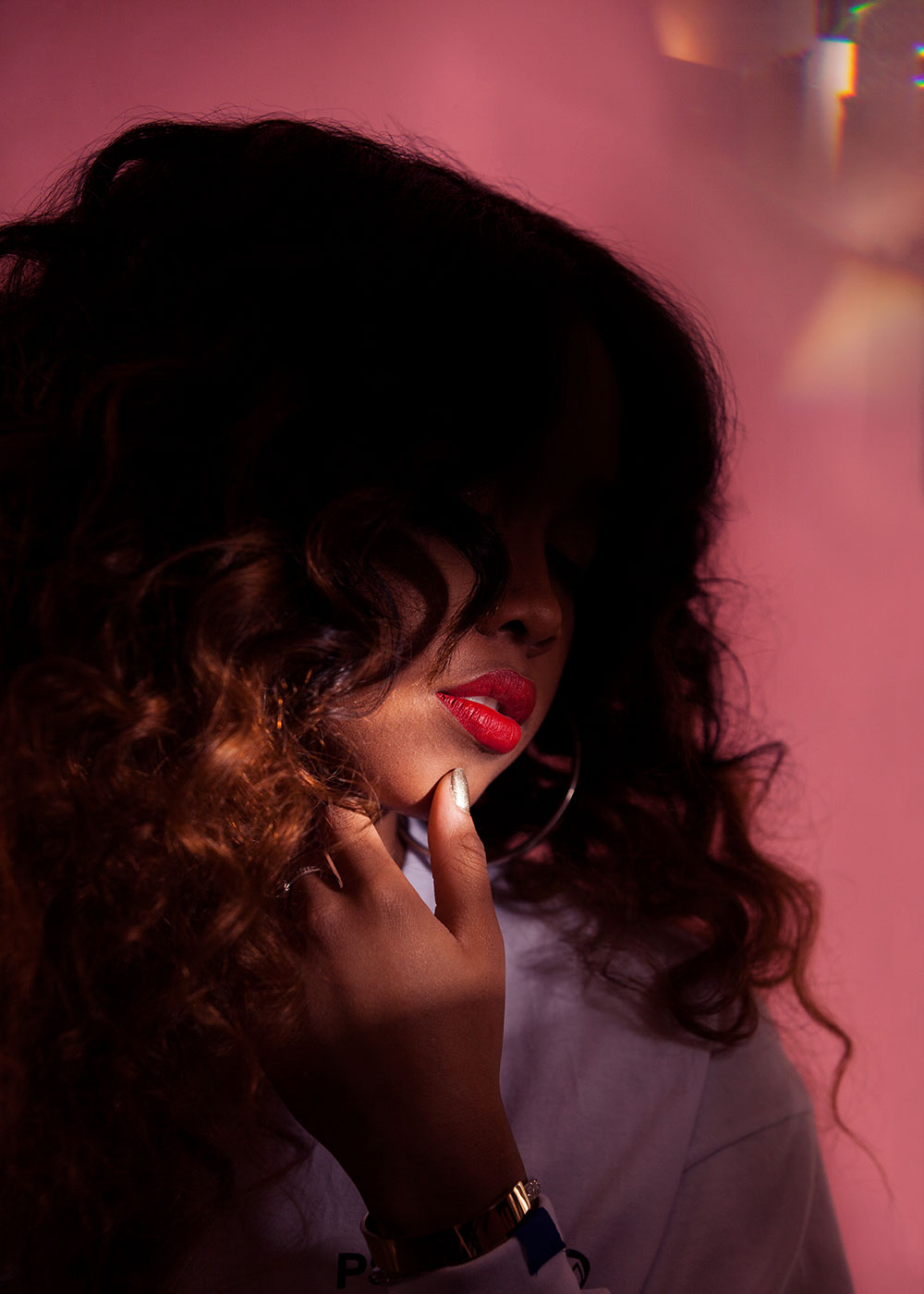 That makes a lot of sense. In your words, can you tell me what the acronym H.E.R. – having everything revealed – means and why you chose it as your pseudonym?

People say I’m hiding my identity but actually, I think Having Everything Revealed means that you know exactly who I am through my music. It’s the most raw and the most honest part of me, you have my music and lyrics and that’s how you know who I really am and what I really represent and what I’m about.

Amazing! Do you think that it is, in essence, a reflection of your true self or it’s more like an alter ego that you want to put forth on stage?

Yes it’s definitely my true self. I guess there are many versions of me, but my music is my purest form.

H.E.R.’s first album instalment, I Used To Know Her: The Prelude is available to stream now. Listen here or below.