The moment we’ve been waiting for is over – the Nike Mags are real. It’s still Back to the Future Day in parts of the northern hemisphere and Nike have come good on their cryptic tweet to Michael J Fox, presenting him with the first pair of real-life 2015 quality self-lacing Mags. Tweeted via Fox’s charity account, the OG Marty McFly can be seen testing them out. The love for the film and character’s legacy is very real with this one – Fox also shared the handwritten letter sent to him by celebrated Nike designer Tinker Hatfield.

“As the first most celebrated wearer of the Nike Air Mags we wanted you to be the first to receive a living pair. I meant Nike Mags. (I must have ‘Air’ on the brain!)”

You can even watch him test out the actual power-lacing feature here. And while we won’t be able to try our own self-lacing kicks on the same day, it looks like we’ll have the opportunity to do so in the near future – Spring 2016 (not another 30 years from now, fortunately). In the letter, Hatfield wrote:

“In addition to your personal pair, we’re creating more pairs for support in aid of the Michael J Fox Foundation in 2016.” 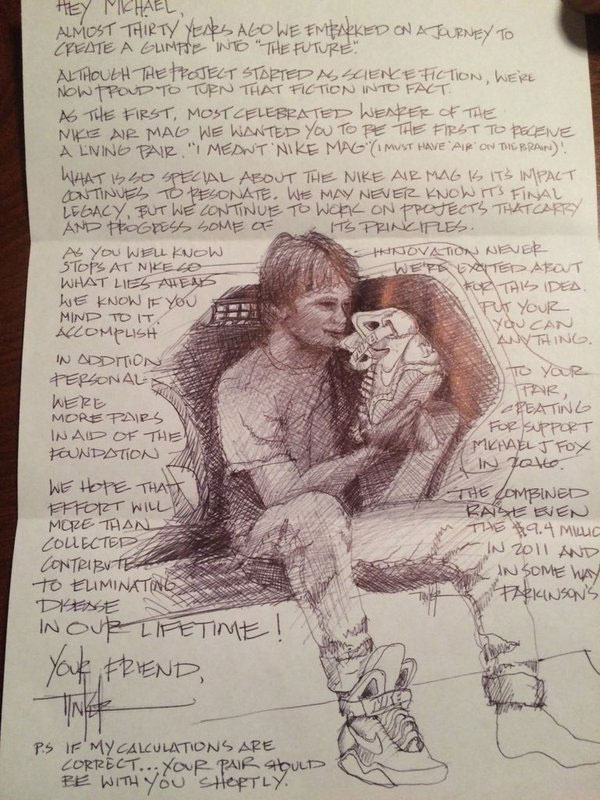 Watch: Is Crep Protect good enough to keep ketchup off Nike Air Mags?
The power-lacing Nike Air Mag might be on its way
A Halloween store is selling realistic looking Nike Mags